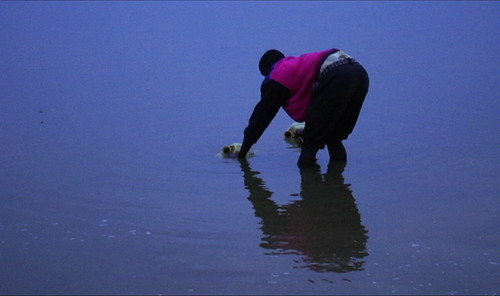 It is no secret that most of the time, humanitarian, social issue documentaries are formally shallow. This is a result of different sets of priorities. Most of the people who make these sorts of films view the medium as a means to an end — a popular, digestible medium with which to publicize a particular problem. They exist in a world apart from the boutique docs that find their way to theaters or big festivals. The argument that regularly takes place between partisans of each mode is basically intractable. So it is nice when a film like Good Fortune comes along — a liberal documentary fully pedigreed by Human Rights Watch and PBS — to show that it is not just a question of decadent aestheticism versus sober activism. While its style can hardly be called visionary, it is clear that director Landon Van Soest took great care with the images in his film. It is through this formal skill that Good Fortune‘s story becomes stirring and its politics urgent.

Van Soest’s principle visual maneuver is the transition from macro to micro. He pictures the dense sprawl of tin-roofed houses that make up Nairobi’s Kibera slum in an expansive high angle before leading us into its borders in a languorous, slow-moving track. Prior to bringing us to Jackson Omondi’s farm, he shows the green-gold vegetation of Western Kenya’s Yala Swamp in a long wide shot. Early on, Dominion Farms’ rice fields are captured high in the air from the company’s prop plane. Without being showy, his camera is always traversing space. It articulates, as best it can, how these places’ inhabitants experience their surrounds.

This is appropriate. Good Fortune seeks to explain the larger issues surrounding Western-backed development in Kenya through two very specific subjects. In Nairobi, it follows Silva Adhiambo, a midwife in Kibera whose house is marked to be razed for a UN Slum Development program. Though promised a spot in the Modern high rises that will replace the jury-rigged shacks that comprise most of the neighborhood, she and her neighbors distrust Mwai Kibaki’s government, through which the aid is funneled. They have seem similar promises broken elsewhere in Kibera. When a new building is finally completed, the apartments go to bureaucrats and the military instead of the people who have been displaced. In Yala Swamp, Van Soest focuses on Dominion Farms, a private company that plants rice fields in an attempt to stimulate economic growth. Omondi’s farm borders Dominion. The river the entrepreneurs have damned for irrigation constantly threatens to overflow and flood their neighbors’ land. When the dam does eventually burst, Omondi’s crops are destroyed and his livestock drowned. He must temporarily abandon his home.

The institutions behind these public and private initiatives share a basic disinterest in the concerns of the people they are ostensibly helping. As Omondi has it: “I am not poor. I have a resource I can exploit that will maybe make me rich, but now this resource is being taken away by a developer”. Neither he nor Adhiambo resent the aid schemes in and of themselves, but by Good Fortune‘s conclusion both have been forced to organize and protest the projects that threaten their stability. For both segments Van Soest has found passionate, articulate delegates against top-down, foreign-backed development. He is particularly good in teasing out the nuances of the situation in Kibera. There are interviews with two UN representatives, one of whom grew up in the neighborhood and lives in the same sort of housing as Adhiambo, who support the demolition as fervently as many of the locals oppose it. He takes a more direct tack in Yala. Playing on liberal prejudice against the free-market ventures Dominion represents, the company is seen as villainous and essentially uncaring. I share these prejudices, and Dominion indeed seems disingenuous in their claims. There may be no more to the story than that, but in comparison to the urban segments, the Yala section feels under-drawn.

http://johnmackoconstruction.com/?p=16136 Cheap Good Fortune does not tell the whole story of development in Kenya. It is, by design, one piece of a much bigger puzzle. This largely a good thing. The film’s vividness is a result of its modesty. Instead of trying to summarize a history whose nuances are beyond his scope, Van Soest opts for metonymy. It is through this specificity that he avoids the more obvious traps that await a white Brooklynite telling an African story. Good Fortune online speaks neither the Conradian/Naipaulian register of hopeless African despair nor the anodyne, pitying tone that is its flipside. In other ways, however, Van Soest’s ambition outpaces the material. There is not quite enough here for a feature — the film’s middle section cross-cuts between reiterations of the same elementary conflicts. And towards its latter half, it veers into a halfhearted narration of Kibaki’s contested 2007 re-election, which, though certainly linked to the Good Fortune evecare buy ‘s central issues, is not detailed enough to merit inclusion.

Has this review been boring? It wasn’t a lot of fun to write. Good Fortune is a solid movie — engaging, deliberate, about something important — but I can’t imagine it producing much conversation. It will satisfy its built-in audience, and divert those who come across it on television, but it is unlikely to reverberate much in the wider world. During the documentary criticism panel that preceded it at UnionDocs this past weekend, Ed Halter concisely slotted documentary as “an amalgamation of art and journalism”. A good-but-unexciting film like Good Fortune Order illustrates how uneasy that amalgamation can be, and how weighted it is toward the art end of the formulation. The stalwart everyday reportage to which the film is akin is lucid, informative, and necessarily contingent and limited. But it places fewer demands on our attention, and occupies a humbler cultural space than a 75-minute film. Perhaps I am being too precious in my expectations, but this seems a fundamental existential predicament with which documentary must contend. It is troubling that Good Fortune, as good a piece of cinematic journalism as I have seen in a long time, does not even begin to address it.