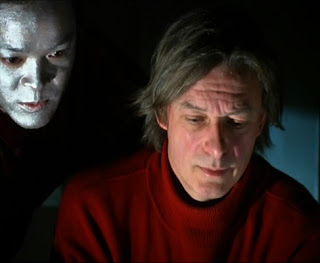 The videos collected in Chen Tamir’s Life Stories online program are as much about biographers as the lives they depict. Though each of these four works are more-or-less straight interviews, none of the artists here are content to let us believe that their documentation provides us with a direct link to their subjects. Each of them devise strategies to disrupt or amplify the flow of conversation in order to make obvious their machinations and ours. “The supposedly simple, neutral act of documenting people speaking about themselves” Tamir writes in the essay that complements the exhibition “becomes, in these works, a loaded exercise in power dynamics”. This is territory whose bounty has been well-reaped: anyone who has set foot in an art gallery or a college classroom in the last 30 years knows well the power differential that separates representer from represented. It sometimes seems that it is impossible for anyone schooled in the theoretical tradition that extends from Foucault onwards to tell a story unselfconsciously. But without any way to actually cede control, the artist’s disavowal of her authority is a gesture without consequence, like prefacing some bit of hurtful criticism with “no offense”. In Life Stories, the pieces that really work are those that dramatize these power relations in real time, drawing the viewer into the dynamic rather than just pointing dutifully towards it.

Mayaan Amir and Ruti Sela’s Beyond Guilt trilogy is the highlight in this measure. The Israeli duo shot three sets of interviews in erotically charged locations with different people all, in one way or another, prowling for sex. In part 1, they go to a nightclub bathroom to quiz the revelers therein about their sexual habits. Set to Fischerspooner’s pulsating “Emerge”, and punctuated with quick cuts to black, this is the most playful of the three videos. It is also the most confrontational: as the interviews progress, it starts look less like a series of conversations than a test of mettle. Sela and Amir Pills goad their subjects into stripping for them, they watch a girl who looks no older than sixteen seduce two men, and grill an IDF dipyridamole generic sergeant on her feelings about Arabs. Through they wield the camera, neither is content to remain aloof. They laugh and joke with their interviewees, and disrobe as well, dancing around in their underwear with a group of men. That they are exploring the power they hold over their subjects becomes most apparent when Amir tries to barter with a young man for his necklace. He tells her it is priceless, and she offers him a Buy blowjob in exchange for it. With each of his refusals, she ups the ante, until she has offered to take him and all of his friends on at once if he is willing to part with it. Whether or not she’d actually go through with it, the scene manifests a suspense and spontaneity that stands in opposition to the dreary schematization potential in such an exercise. In this single interaction, Amir and Sela demonstrate the filmmaker’s ultimate control, and flirt with the possibility of its undoing. For part 2, the pair posted an ad on a dating website inviting men to a hotel room for s&m play and dialogue. The men who show up know what they are in for in, and they evince a comfort with their sexuality not seen in the more furtive atmosphere of the club. They show off their toys, submit to handcuffs and blindfolds, and jump on the bed as they candidly describe their turn-ons. As in the first segment, the conversation quickly turns from sex to the army. One of the doms directly links his experience as a commander in the IDF to his preferred sexual role, another man compares his monstrous erect penis to the weapon he carried as a soldier. It seems impossible to discuss sex in Israel without also mentioning military service. Amir and Sela want to illustrate how mandatory conscription has, in this country, suffused every day life with the aura of force and domination. In this environment, the questions of control implicit to eros are laid bare. And given what we witnessed in the first video, it is difficult not to see the artist’s mastery of her subjects as the third point in a triangle. Beyond Guilt #3 finds Amir and Sela in another hotel room, this time with a 50-something career prostitute. They hand her the camera and conduct the interview from the other side of the lens. Interspersed with questions about her career, the pair ask her what she sees, how she would describe them. This role reversal is the most obvious of Amir and Sela’s maneuvers, but they don’t pretend to have subverted their dominion. Even as objects of the camera’s gaze, they know they have the ultimate say. From the front of the camera, they direct the prostitute’s photography and demand her commentary. They enact the impossibility of their submission. At the end of the video, the prostitute joins them on the bed. Together, in costumes, they pose languidly for their viewers. In all three of the videos, Amir and Sela resist didactic moralizing or abnegation of their responsibility. Each is filled with laughter and dancing, and characterized by a certain openness, the sense that at any point, it could swing in a new direction. Beyond Guilt allows for a genuine push-pull between documenter and documented without eliding the documenter’s ultimate power.

Tova Mozard’s portraits Leona Babette, Westwood Los Angeles and Wall of Love are more conventionally “life stories” than anything else in Tamir’s program. Leona Babette is an aging cabaret singer, shown here in her almost entirely red living room. Mozard’s camera remains static, at a middle-distance, pointed on Babette, as she stumbles through a description of her work, picking up and abandoning songs halfway as quickly as she started. Mozard doesn’t ask any questions, even as Babette seems to beg for them. She assumes the role of her audience: an unspeaking spectator, watching the speaker unravel. When Babette faces the mysterious hand behind the camera at the end of the video and says “you don’t say much, do you?”, it is supposed to seem as though she is speaking to us. Wall of Love — which shows a Swedish objectum-sexual woman, estranged from her husband, The Berlin Wall, in her home, as she narrates in voiceover the story of her strange marriage — ends on a similar note: the subject points a still camera towards the videographer and snaps a photo. Tamir believes that in these actions we the audience are implicated for our voyeurism. Perhaps we are, but not meaningfully. Both pieces devote the bulk of their run times to satisfying our curiosity about these eccentric women — and while Wall of Love goes to great lengths to contextualize its subject in a banal domestic setting, the long shot that isolates Leona Babette in her garish furnishings only renders her more exotic. With only a brief nod towards the problems inherent to our fascination with freaks, both videos are structured to reward that fascination rather than undermine it. Mozard’s implication of our culpability may briefly point our thoughts inward, but our experience of the videos is so heavily weighted towards the pleasures she cautions against that whatever challenge they pose is perfunctory and easy to ignore.

“Easy to ignore” is not among the ways you’re likely to describe Human Opera XXX, which closes Tamir’s program. Cheap Meiro Koizumi’s Purchase video is a cruel and clever burlesque of the gauntlet run by anyone naive enough to consent to an on-camera interview. A title informs us Koizumi placed an ad offering money to anyone willing to recount a tragic episode of their life on video. As the camera zooms back from an indistinct paper background, it reveals a dark room cluttered with strange objects. Koizumi, his face covered in silver makeup, scurries around fiddling with things. Eventually an earnest Dutch man arrives. Koizumi seats him, and the video cuts to another angle, closer on the man’s face. He introduces himself as Rob Hoekstra. Just as he begins his sorry tale, Koizumi interrupts him. He tells him the image isn’t right and hands him a prop. Hoekstra starts again, but just as quickly, Koizumi stops him. He directs him to wave a wand back and forth as speaks. Somewhat reluctantly, Hoekstra agrees and again begins narrating a story about how his alcoholism cost him his wife and child. Koizumi continues to cut him off, adding additional visual flourishes. Hoekstra, whose face betrays a muted, deeply-felt sadness, only halfheartedly protests when Koizumi informs him that he needs to paint his face. Eventually Hoekstra is completely draped in elaborate articles (tin foil protruding from his face, toilet paper hanging from his arm), his face and chest tagged with permanent marker, and mouth stuffed with a roll of bread. He tries to bleat his story through the gag, but Koizumi drowns him out by wailing through a tube that points directly at him. The piece is structured like a joke, but Hoekstra’s anguish seems too real to be funny. This is a reductio ad absurdum of the interview process, and the command a filmmaker exerts not just over the finished product, but during production as well. Koizumi’s target is the artist himself, but his project is also more effective than Mozard’s two videos in forcing the audience to examine their motivations for watching. His spectacle is so quietly brutal that it’s tough not to question why we would elect to participate in a game so rigged from the outset.

To describe a person or event is to seize control over it, to transform the multiplicity of meanings innate to a real life event and filter it through a single, exacting consciousness. A director of non-fiction films or videos must take this responsibility very seriously, but they cannot be hamstrung by it. No matter how conscientious, the artist will forever dominate her subject. The videos in Chen Tamir’s Life Stories demonstrate that a kind of pragmatic irony goes much further than fearful ass-covering for any author looking to interrogate their own unceasing authority.