Shorts After the Flaherty

Join us for an evening of film and video featuring some of the presenting artists from the 60th annual Robert Flaherty Film Seminar as well as some additional artists who attended the Seminar.

Conceived across three monitors, these (speech) acts perform utterances from the voice to the body, the body to voice as an exposition of voice, silence, gesture, and authority. Each performer is cast in relation to their own position. They include: Hollywood actor and co-founder of the collective Mosireen a non-profit media centre in Downtown Cairo born out of the explosion of citizen journalism and cultural activism in Egypt during the revolution. Khalid Abdalla stands in downtown Cairo just a few weeks prior to the revolution speaking about the propaganda drive of Western Cinema in their depiction of the Arab body; Act of State an interpretation and translation of the exhibition curated by Ariella Azoulay created from photographs by Palestinians about their struggle which Azoulay argues is a ‘citizen contract’ in the absence of legitimised legal citizenry, and artist Nabil Ahmed speaking on contemporary labour and migration issues intertwined with his heritage and knowledge of the language movement from Bangladesh and his desire to protest against precarity in the UK. While each work is a speech act that is self-contained, the accumulation of the voices speak to each other and the exhibition as a whole through the spatio-temporal strategies of adjacency and (off)setting of timing. A choreography of images and temporalities collect a collective practice.

Stories slip between construction, rhetoric and reality with implausible ease: language itself appears to create and propagate the conditions of authority, violence, and division. As the Narrator continues to hijack the rhetoric of cultural and political discourse to rupture, Mirza and Butler expose the absurd ventriloquist act.

+ a special screening of a work in progress from Mirza & Butler

Swanson and Sons advertised their first TV Dinner in 1954.21 The story goes that executive Gerald Thomas didn’t know what to do with 270 tons of left-over Thanksgiving turkey. Inspired by the aluminium food trays used in the airline industry, he picked up on the idea of filling the trays with turkey and marketing them as a TV Dinner for 98 cents a piece. And so another new cultural icon zapped itself into the living room, transforming the eating habits of millions of Americans.

Compiled from surveillance recordings from an urban apartment building, the activities of the inhabitants provide evidence for the theory of emergent behavior, and direct analogies between human and animal behavior. What is being sprayed upon whom? Why is the man burning his armchair? What exactly is the man expecting to find in the trash? And many other questions posed in this lecture on leaderless organization.

Shot on the last day of August, the artist aims his camera out the window seeking respite.

Springtime along the Mid-Atlantic seaboard, thousands of horseshoe crabs spawn on beaches under the glow of the full moon. A brief glimpse into a 450 million year old ritual. 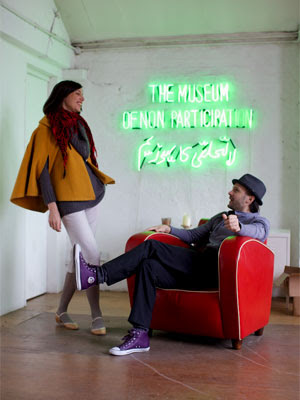 Karen Mirza and Brad Butler’s multi-layered practice consists of filmmaking, drawing, installation, photography, performance, publishing and curating. Their work challenges terms such as participation, collaboration, the social turn and the traditional roles of the artist as producer and the audience as recipient.

Since 2009, Mirza and Butler have been developing a body of work entitled The Museum of Non Participation. The artists have repeatedly found themselves embedded in pivotal moments of change, protest, non-alignment and debate. Experiencing such spaces of contestation both directly and through the network of art institutions, Mirza and Butler negotiate these influences in video, photography, text and action.

They are shortlisted for Artes Mundi 6, an international art prize recognising artistic practices that engage with the human condition, accompanied by an exhibition in Cardiff, Wales, in November 2014.

Johan Grimonprez is a Belgian multimedia artist, filmmaker, and curator. He is most known for his films Dial H-I-S-T-O-R-Y and Double Take. As of 2014, Grimonprez’s upcoming projects include the feature films How to Rewind Your Dog and Shadow World: Inside the Global Arms Trade, based on the book by Andrew Feinstein.

Gibbs Chapman has worked in and around audio/visuals in San Francisco since 1984. As a recording engineer, he has been involved with hundreds of recordings ranging fromThinking Fellers to Marianne Faithful and additionally has worked on composing, recording, and/or producing many music and sound pieces, and sound for film for American Playhouse, among others. Mr Chapman has become active as a cameraman and audio manipulator for film and video, working on hundreds of shorts and features and has written, directed and resourcefully produced numerous films of his own. He is also owner of non productions, a small audio/visual factory in San Francisco and works as a technician and consultant in recording studios, post-houses and performs myriad duties from negative cutting to lens repair in an effort to finance his personal projects. Mr. Chapman is also a senior projectionist and collection inspector at the Pacific Film Archive and for the last seven years has been a technical pivot for the Flaherty Film Seminar.

Sean Hanley is a Brooklyn, NY-based educator and filmmaker pursing experiments in the documentary genre. His work as a director and/or cinematographer has shown at the Museum of Modern Art, the Ann Arbor Film Festival, the Images Festival, the Pacific Film Archive, the Vancouver International Film Festival, FLEXfest, EFFPortland and the Black Maria Film + Video Festival. He is the Assistant Director of Mono No Aware, an annual exhibition of expanded cinema and film-installation.

Caspar Stracke is an interdisciplinary artist, filmmaker and curator from Germany, living and working in New York City and Helsinki. His work deals with architecture, urbanism, media archeology and the social aspects of cinema. Stracke’s films, videos and installation works have been shown internationally in numerous exhibitions, retrospectives and festivals throughout North and South America, Europe and Asia. Stracke’s work has been shown at MoMA, the Whitney Museum and the New Museum in New York City, the Yerba Buena Art Center in San Francisco; the Filmmuseum in Frankfurt, Germany, the Reina Sofia in Madrid, Spain, the Centre Pompidou in Paris, France and the ZKM in Karlsruhe, Germany, among others.

He is the recipient of a Rockefeller Media Art fellowship and currently finalizes a film project on various notions of time reversal in philosophy, science and cultural theory. He is an active member of THE THING, a NY-based nexus for contemporary art and net culture. Since 2012 Caspar Stracke is a professor for Contemporary Art and Moving Image at KUVA Art Academy Helsinki. Caspar Stracke is represented by Video Data Bank, Chicago and Lightcone, Paris.

Gabriela Monroy is a Mexican video artist and video curator living and working between Helsinki and New York. In 2001 she received a Masters in Film and Video from the School of Art Institute of Chicago. The same year she was awarded Mexico’s National Foundation for Culture and Arts Fellowship for Young Emerging Artists. Her video installation work was selected as part of the 10th National Biennial of Photography of Mexico. In 2009 she was selected as one of The MacDowell Colony’s National Endowment for the Arts fellowship recipients. In 2011 she was awarded the NYFA/ Deutsche Bank America’s Foundation Fellowship in Digital and Electronic Arts. She had been invited as juror for Transitio – International Festival for Electronic Arts and Video. She has participated in exhibitions in Mexico, Europe, Korea and the US, and her work is part of the INBA collection, Mexico’s National Institute for Fine Arts.

Since 2002, she has been working in collaboration with the German video artist Caspar Stracke under the name MOSTRA. In 2004 they were awarded a NYSCA Film and Media Production Grant for an Interactive video installation for cinema space and this year they received an EMARE residency at FACT (Liverpool).

Since 2005, Gabriela and Caspar are the directors of video_dumbo, an annual festival/exhibition of international contemporary moving image art in New York. Video_dumbo has been presented at Loop (Barcelona), Museo Rufino Tamayo (Mexico), Bundeskunsthalle (Bonn), MMX (Berlin), Space Bandee (Busan) and The Banff Centre, among others. This year video_dumbo presented 106 artists from 29 different countries at Eyebeam, Art + Technology Center in New York.

About the Flaherty Seminar