Today’s most innovative cinematography is happening within micro and small budget cinema. Contemporary cinematographers are inspired by these constraints to push toward new ways of filmmaking.

This weekend workshop will provide hands-on classes and lectures geared toward practical application of the strategies used by top cinematographers in documentary and fiction filmmaking.

The workshop will be lead by Yoni Brook (Spirit Award for Cinematography nominee “Valley of Saints”), who will lead discussions with guest instructors Omar Mullick (These Birds Walk), and Paul Yee (The Fits), Nadia Hallgren (Trouble The Water, Trapped, Citizen Koch), Luke Geissbuhler (Borat), Michael Simmonds (Man Push Cart, Chop Shop) Sessions will be structured as masterclasses, consisting of screenings from each cinematographer’s work, followed by discussions to break down the specific story approaches and tools. We’ll investigate the fluidity between fiction and documentary filmmaking, and how techniques from each genre can be applied toward the other.

Participants in the workshop should be intermediate to advanced practitioners of cinematography, either as a working professionals or advanced students. Participants should come prepared to present examples of their work for feedback and discussion from the visiting lecturers and fellow participants.

This workshop is three full days; please only enroll if you can commit to the entire schedule.

Open to everyone, though the workshop setting is best suited for intermediate to advanced practitioners of cinematography and filmmaking

Give us an idea of who you are and why you are coming. When you register you will be asked for a short statement of interest that should briefly describe your experience in filmmaking practice and a project in progress, plus a bio. There’s a spot for a link to a work sample and CV, which would also be nice, but is not required.

In order to keep costs down, this workshop is a BYOL, i.e. bring your own laptop. Lecture I: Cinematography: a creative process

A personal introduction by Yoni Brook. Examining his own career and influences, Brook will introduce micro-budget cinematography, and the creative possibilities embodied within limitations.

With cinematographer and filmmaker Nadia Hallgren, we’ll talk about the methods of verite documentary filmmaking. We’ll explore how cinematographers build relationships with our subjects in front of the camera, as well as directors and producers on the creative team.

Luke Geissbuhler has shot projects requiring high degrees of precision (OK GO) as well as documentaries produced within uncontrollable contexts (Buck, Borat, Urbanized). We’ll explore situations from his filmography where he has maximized limited budgets (including sending a homemade ballon to edge of space).

We’ll examine strategies for using the handheld camera as a storytelling device. With guest Omar Mullick we’ll conduct a handheld workshop out on the streets of Brooklyn. Students should bring camera (or even a mobile phone) to shoot a sample scene for discussion. Yoni Brook is a director and an Independent Spirit Award-nominated cinematographer. He shot his first feature film, VALLEY OF SAINTS, winner of the Audience Award at the 2012 Sundance Film Festival, with a makeshift crew under a military curfew in Kashmir. He is the cinematographer of Syeed’s upcoming feature film A STRAY (SXSW ‘16). As a cinematographer, he has also collaborated with directors Sam Green, Matt Wolf, Marilyn Ness, Eric Gottesman, and Pacho Velez. In collaboration with Musa Syeed, he has directed three documentary films: BRONX PRINCESS (PBS POV, Berlinale), THE CALLING (PBS Independent Lens), and A SON’S SACRIFICE (PBS Independent Lens, Winner Best Documentary Short at the Tribeca Film Festival). Omar Mullick is a film director and cinematographer known for his work on the 2013 feature film THESE BIRDS WALK. In 2012, Filmmaker Magazine named Omar one of the 25 New Faces of Independent Film. Premiering at SXSW in 2013 and distributed theatrically by Oscilloscope Laboratories, THESE BIRDS WALK went on to be named as one of the best films of the year by the New Yorker Magazine, Indiewire, and Sight + Sound Magazine. It currently ranks as one of the best ever rated documentaries on Rotten Tomatoes. Trained as a photographer, Omar’s work was published in The New York Times, Foreign Policy Magazine, National Geographic and TIME, receiving awards from the Doris Duke Foundation, the Western Knight Center for Journalism, Annenberg and Kodak. In 2009 he was granted a solo show of his photographs titled ‘Can’t Take It With You’ at the Gallery FCB in Chelsea, New York. His current work as a cinematographer and director includes as clients HBO, VICE, CNN, PBS, Discovery, Al Jazeera America and The Gates Foundation. Paul Yee is a cinematographer based in New York City. He recently lensed The Fits (Venice 2015, Sundance 2016, New Directors/ New Films 2016), Anna Holmer’s debut narrative feature. It will be released by Oscilloscope Laboratories in the summer of 2016. He has worked on the award-winning HBO documentary series East of Main Street since its inception in 2010. He is also the additional cinematographer for It’s Me, Hilary: The Man Who Drew Eloise (Sundance 2015). He has shot music videos for artists ranging from Aimee Mann to ZZ Top which have gone on to screen at film festivals such as SXSW and the LA Film Festival. Paul has also shot short-form documentaries for the Whitney Museum, MOMA, and the New Museum and worked on a variety of commercial projects for clients such as L’Oreal, DIRECTV, and Clear Channel.  He is an avid cook and food photographer, which has led him to direct and/or shoot for Barilla, Sabra, and Campbell’s. Prior to becoming a cinematographer, Paul spent several years as a gaffer on independent films, experience that provided him with a strong technical background in lighting. 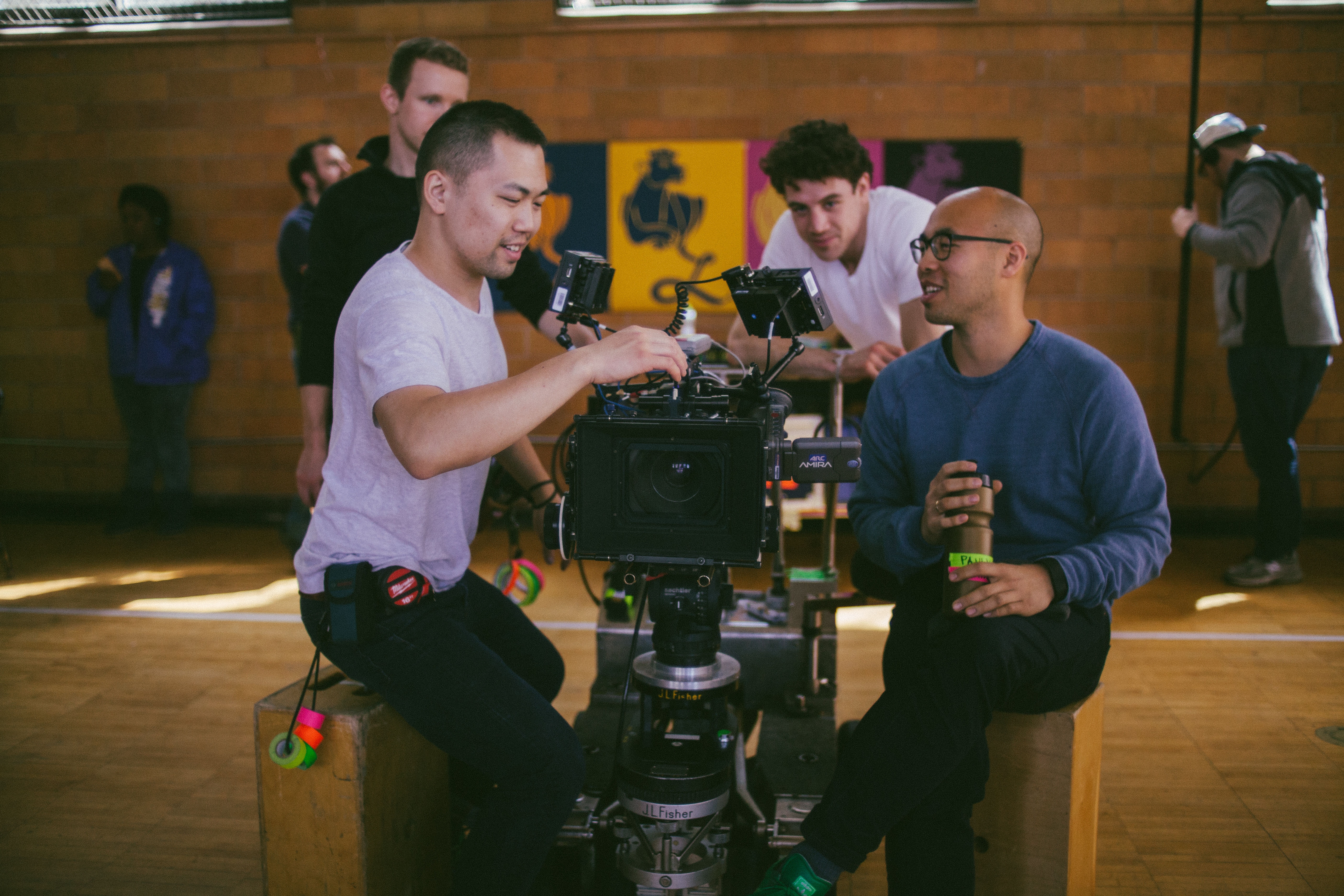 Nadia Hallgren is an award winning filmmaker and cinematographer from the Bronx, New York with over a decade of experience working across 5 continents. She has DP’d numerous feature films including the Academy Award nominated and Sundance grand jury prize winner Trouble the Water, Trapped, Citizen Koch, Tough Love, War Don Don, and The New Black. Hallgren has also contributed photography to Fahrenheit 9/11, Searching for Sugarman, The Hunting Ground, Suited, Southern Rites and How To Dance in Ohio. Nadia has worked closely with top documentary filmmakers including, Sharmeen Obaid-Chinoy, Joe Berlinger, Morgan Spurlock,, and recently co-directed a short film with Laura Poitras. Nadia specializes in cinema verite and was trained under the tutelage of KIrsten Johnson. Hallgren is a Sundance Fellow, a Cinereach fellow, and an alum of International Center of Photography. Nadia serves on the board of the Bronx Documentary Center, a non-profit organization dedicated to sharing photography and film with underserved Bronx Communities.

Luke Geissbühler has excelled as a cinematographer in nearly all genres of filmmaking with over 25 feature films, 20 documentaries, and countless television shows, commercials, and web content to his name. His achievements include having shot Borat, the documentaries Buck and Helvetica, as well as Sir Patrick Stewarts’s tour de force performance in the film Match.  He has been entrusted to photograph the most beautiful women in the world working with Victoria’s Secret consistently for many years.  Luke became unexpectedly world renowned when he and his eight year old son launched a camera into astonishing near space in a homemade capsule, as seen in the short filmSpace Balloon.  A native New Yorker and self taught engineer, he received a Bachelor of Fine Arts from New York University’s Tisch School before starting his career at R/GA doing special effects and tabletop photography.  Since then, he has traveled the globe many times over to orchestrate elaborate shoots for OK Go, The Muppets, Nike, Amazon, Adam McKay, Doug Liman, Barry Levinson, and Katherine Bigelow, among many others.