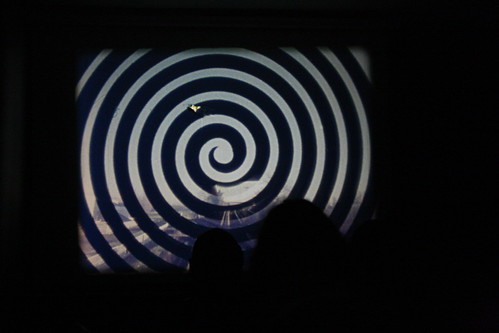 There is no one younger than 50 who has done more to preserve the legacy of cinema’s mid-century avant-garde than Pip Chodorov. His Re:voir video company distributes VHS and DVD copies of classic experimental films by Stan Brakhage, Jonas Mekas, Ken Jacobs, and many others, for home and classroom use. He maintains the Frameworks listserv, the internet’s most active forum for discussion of experimental film. In 2005, he opened the Film Gallery in Paris, apparently the first gallery space devoted solely to screening avant-garde films. In these roles he embodies the contradictions inherent in preserving the work of filmmakers who define themselves by their unconventionality. This is an irony that has long plagued scholars and critics who must re-contextualize forward-thinkers of the past. But it’s a particular problem for film, where more often than not the phrases “avant-garde” and “experimental” refer to films that engage the generic lineage of 50s and 60s artists like Maya Deren or Hollis Frampton, rather than any particular pioneer status. This isn’t a problem, in fact one of the things that makes this work interesting is that it participates in a living, coherent tradition, but there’s something disquieting about the gap between the appellation and referent.

The other problem that arises is that, as the tradition’s concerns evolve with few people watching, it becomes increasingly difficult for outsiders to grasp what these films are even trying to do. As with academic poetry or modern dance, understanding a new works requires having already devoted many hours to studying the films on which they build. Each film becomes more like a research than a piece of art that at least theoretically communicates something about the wider world. It also makes viewing the work feel more like duty than pleasure. There’s a certain satisfaction in that kind of film-watching, but it’s dispiriting to find yourself talking to a smaller and smaller group of people, and having an even more difficult time convincing friends that they should spend their time engaging this stuff. The three Pip Chodorov films screened at Union Docs on Friday all suffer from this difficulty. The first two– Charlemagne 2: Piltzer and Faux mouvements —  are both small formal experiments. For Charlemagne 2, Chodorov blew up Super-8 footage he shot at a 1998 concert given by his friend, the composer Charlemagne Palestine, to 16mm and reprinted it according to an arcane set of procedures in order to create a kind of visual analogy for Palestine’s harmonic-based music. In Faux mouvements, he printed spirals, criss-crossing diagonal lines, and other animations on still imagery to produce the illusion of motion. The complete processes behind both films require great care and elaborate notation to explain, but their immediate aims are fairly clear. Chodorov is exploring the relationship between various cognitive principles and film-watching. Whether this is done in the service of some larger goal is unclear. They are in this sense experimental, but these are experiments that produce no real knowledge for cognitive science or film theory. Chodorov uses these disciplines as trellises for his formal choices. He can point to them to answer the question “why make films like this?”, but that alone cannot satisfy the impulse behind the question. Neither Charlemagne 2 online online nor Faux mouvements will change the way you look at or experience the world, they simply scratch whatever small itch you had to see certain axioms applied to filmmaking. Chodorov has a great eye, and a strong sense of pacing; his films are beautiful, and they evolve quickly enough to maintain interest, but it’s hard to imagine urging someone who has not already cast their lot with this mode of cinema to see them.

Pastrami Recordings, the third Chodorov film screened this weekend, plays a more pernicious sort of inside baseball. It was commissioned for a Paris-based festival of films about New York. Chodorov spliced together “rushes” of footage he shot in his city of birth between 1995 and the summer of 2009 to be screened alongside improvisations by Charlemagne Palestine. There is a kind of loose narrative, or at least there are identifiable, discrete sections of montage, but overall it is an impressionistic diary film. There are some stunning shots, many of which, in the passage of time, have taken on an elegiac tone, most notably an extended Super-8 sequence shot from the windows of the World Trade Center. But the film neither reimagines the city, nor coherently describes its complexities. At best, it captures something about the lives of a specific group of people during a specific time in the city. Unless you can already pick Jonas Mekas and Bill Morrison out of a crowd, or very quickly place the interior of Mars Bar, this is probably not your New York. Of course there’s nothing wrong with documenting your friends, but Chodorov’s self-contained, diaristic style fails to create a context in which the viewer to enter his world. The result is an off-putting solipsistic tone that overwhelms the tactile beauty of Chodorov’s Super-8 camera work.

As with the other two films, there is certainly interesting material here for a viewer already hip to the priorities of the avant-garde film scene, but there’s really no basis here on which to appeal to a wider public. As audiences dwindle, and the stakes get lower, experimental filmmakers should be asking themselves how they can make their work relevant to those outside the choir. This doesn’t mean pandering to some populist abstraction, but it requires making a film’s rewards commensurate with the work of parsing it.

Ian Cheney’s Order Order The Greening of Southie grifulvin v online tv is also unambitious in approach, but here the modesty is refreshing. Documenting the construction of Boston’s first LEED-certified ‘green’ building, Cheney’s is more or less an issue movie. Many docs of this kind are too needy. Incessantly telegraphing their goals, they address their audience in the contemptuous and hysterical tone of contemporary news media. Cheney’s support for environmentally-friendly building is implicit in his project, but he is content to remain ambivalent about South Boston’s Macallen building itself. His film asks not whether green building is a good or bad thing, but the far more interesting question of what green building means to the people who construct and live in such spaces. He takes obvious pleasure in speaking with his subjects, and detailing the labor required to erect the luxury condo building. Almost everyone who appears on screen — developers, workers, neighbors, city officials — is asked to define green building, and few are able to provide a satisfactory answer. Their confusion is not treated as an occasion for mockery, or as a reductive indictment of green construction, but as the basis for a serious conversation about the ends these projects serve and what kind of sacrifices are worth making on their behalf. Cheney devotes most of the film to the construction workers assembling the building. South Boston is historically a working class neighborhood. Many of laborers depicted grew up or live in the neighborhood that the Macallen building is helping to gentrify. This fact does not go unremarked upon in the film, but Cheney does not condescend to or romanticize his subjects. Most of the people he interviews are cautiously optimistic about the building’s environmental goals, but still concerned about the influx wealth into Southie. Without obscuring the real effects of development, Cheney is careful not pitch his story as one of the righteous poor fighting real estate speculation.

It’s worth noting Cheney’s conflict of interest. Tim Pappas, the CEO of Pappas Enterprises, the company behind the Macallen building, provided most of the funding for the film. On Saturday, Curt Ellis, the movie’s producer, said that he and Cheney knew, going in, that they could not craft an exposé. The deck was stacked from the beginning. But I think this is less of a problem than it initially seems. The Pappas money placed certain limits on what Cheney could and couldn’t do, but motrin 800 purchase The Greening of Southie never feels like an advertisement for the Mcallen building. Cheney is as agnostic about the project’s plusses as he is about the minuses. Some of the alternate green construction materials — bamboo flooring, the cumaru cabinets — have unintended effects, and in re-ordering the materials, Pappas wastes as much energy as they would have using a harsher, but more reliable wood. By the film’s end, we learn that the building received the “Gold Star” LEED-certification they were seeking, but it is not an unconditional victory. The filmmakers could stand to be more direct about their source of their financing — Ellis was open about it during the q-and-a at Union Docs, but it’s not clear from the film alone where their money came from. Barring the revelation of some great misrepresentation or elision on behalf of the developers, however, it would be a mistake to write off the movie for this reason alone. Though Cheney’s film doesn’t offer a scathing critique, it is not an anodyne to the difficult political choices involved in the private development of green buildings. It is a basically democratic movie, concerned with contested interests, and the means and ends by which we satisfy them. By forgoing both phony even-handedness, and scabrous polemic, Cheney allows us the opportunity what “green building” actually consists of, and its implications for our cities.