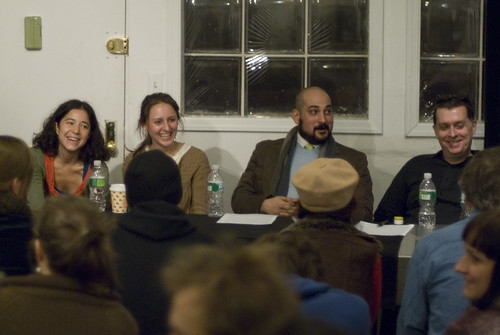 Cross-posted with The Film Panel Notetaker

“It is like running a treadmill and never going fast enough” filmmaker Ashley Sabin said of her efforts to bring her low-budget documentary to audiences. Union Docs February 7th panel Documentary Distribution and Access offered a chance to try to catch up.

With two moderators and seven guests, there are a lot of names to keep straight, so I’ll do us both a favor and start with introductions. Steve Holmgren, who assembled and moderated the panel, is is the programmer at Union Docs. He has also worked at HDNet, Cactus Three, and a variety of festivals. Todd Sklar, Holmgren’s co-moderator, started Range Life Entertainment, a company that tours small films around the country in van, screening mostly at colleges. It is probably worth noting that that both his company and the feature comedy he directed share their name with Pavement songs. Richard Abramowitz has worked as a distributor and producer for over 30 years. He founded Abramorama in 2002, which distributed arimidex buy uk Cheap Pills Anvil! and http://test.okjcp.jp/?p=9859 We Live in Public, among others. Over the past two decades, Jim Browne has programmed work at the majority of New York’s film institutions. Prior to founding Argot Pictures in 2005, he was the Director of Theatrical Distribution at Plexifilm. Caitlin Boyle’s grassroots distro company Film Sprout connects documentaries with unconventional venues like union halls, restaurants, and public libraries. Ashley Sabin got into distribution as a means of making her own work self-sufficient, and in the past year has started acquiring other people’s films for release. Nicholas Jayanty co-founded Reversal Films in 2007 with friends in Austin, TX after they noticed major gaps in the city’s film finance and distribution structures. Andrew Mer runs the Content Acquisitions Department at SnagFilms, an AOL-backed online distributor geared towards thinning the “distribution bottleneck” that forms after major commercial festivals like Sundance. The only non-distributor on the panel was Dennis Lim, who edited the Village Voice’s film section before their arts pages were bowdlerized by New Times. He has since founded Moving Image Source, the critical writing appendage of the Museum of the Moving Image.

Holmgren’s first question– “can you make a living as a documentary filmmaker?”– provided the premise on which the rest of the afternoon was based. The answer was unanimous: unless you’re extraordinarily lucky, you cannot without getting deeply involved in your film’s distribution. It is easy to point to the obvious bias informing the responses — most of these people are unconventional distributors — but it seems commonsensical. With more independent distributors vanishing every year, and fewer lenders willing to take the surefire loss promised by film investment, the future of theatrically released, mid-budget films is, to put it optimistically, uncertain. As Jim Browne argued, the old model, wherein you pay for your film as you make it, and expect to recoup upon its sale at a festival, is no longer much more than a fantasy. “You might as well play the lotto,” he said.

Everyone concurred that at this point, small filmmakers and producers have to take on roles that they had traditionally left to others. Distribution, marketing, and, as Jayanty suggested, even advertising are quickly becoming the producers’ responsibilities. This means apportioning both time and money in advance. Browne recommended that producers include distribution costs in their initial budget outlays, setting aside the money to fund unusual distribution tactics like the kind of tours that Sklar puts together with Range Life. Caitlin Boyle said directors should expect to stay with a movie beyond its appearance at festivals, allowing themselves between two and five years to deal with distribution and marketing before moving on to other projects. Lim noted that critics and journalists faced similar problems. Writing had once “felt like a career,” but these days it seems more like a passion pursued alongside comparatively lucrative work like programming and teaching.

As disheartening as that sounds, the panelists all saw an upside: it is now easier than ever to get your film seen. Of course online distribution is the simplest way to cast a broad net, whether with paying video-on-demand services like GreenCine or iTunes, or free ones like Mer’s SnagFilms. But the quality of streaming video is still not ideal, and nature of this set-up is such that, even taking into account the money you save on travel, and prints or DVDs, it is quite hard to break even. On the internet, you are also competing for increasingly distracted audiences. Ashley Sabin bemoaned the distance online distribution creates: your film is given a greater number of potential viewers than in the past, but you cannot directly interact with them like you can with the people who show up at theaters or community screenings. And Mer, the panel’s greatest advocate for online distribution, admitted that despite the advances made in recent years, the format still has a long way to go. Until it is as easy for your parents or grandparents to watch a movie on the internet, it cannot fully compete with theatrical or broadcast releases. Online should for now, he said, be considered “one piece of the puzzle.”

It has become harder to find conventional distributors willing to bring small docs to increasingly conservative movie houses. Even if you’re able to get booked, fewer and fewer people are willing to pay to see movies in the theater, partially thanks to the online schemes described above. But there are still ways to get small documentaries screened in public spaces. Omnibus programming, like Sklar’s, is one way around the problem. The publicity-minded Jayanty formulated it as “marketing conversations rather than products.” Another possibility is adding a live component to screenings, something audiences could not see at home — “gimmicks” is how Abramowitz bluntly put it. He helped make Order Anvil! The Story of Anvil a success by bringing the band depicted in the movie on tour with it, during which they turned a profit on merch sales. With Film Sprout, Boyle seeks out communities interested in the topics dealt with by a particular film, even if they do not traditionally program films. She was able to place Pray the Devil Back To Hell Buy , a film about the women-driven peace movement in Liberia, on 500 screens by appealing to feminist groups, human rights organizations, and Liberian community centers across the country. “You need to be honest about your audience,” she said, cautioning against Hollywood-style grabs for the widest possible audience. Others on the panel echoed her sentiment. Sklar pointed out that “having access to an audience doesn’t mean it’s the right one.” Abramowitz mentioned that he prefers working with small docs because the audience is so “easily defined.”

That sentiment suggests the weakness inherent to this model. It is perhaps outside of the purview of this weekend’s panel, but I would have a liked a little more discussion about how we can sustain a wider public conversation around non-fiction films. Targeted distribution like Film Sprout’s is an exciting way to bring films to people already interested in them, or in the issues they raise, but they do not contribute to a larger cultural dialogue. Documentary has never had a mass audience, but there used to be a coalition that could keep an eye on the genre’s full spectrum, from social issue films to more essayistic or poetic projects. It is hard to understand why you would make a film if the only people who are going to see it are the ones already crouched in your bunker.

While these sorts of live events and targeted screenings might bring in local news coverage, Sklar was quick to note that they make it no easier to get actual reviews. With fewer critics on staff at smaller papers, opening anywhere other than New York or LA means that a film might screen for months before any critical pieces appear. Dennis Lim seemed a little baffled as to why he was invited, but he provided a valuable perspective from the other end of the distribution chain. He would like nothing more, he said, than to highlight undistributed and overlooked films in festival coverage, or even standalone pieces, but  news outlets are only interested in writing that pertains to the “newsworthy,” in other words films that have already garnered a substantial amount of attention.

The panel provided a broad overview of the distribution options available to small filmmakers without shying away from specifics. Although the outlook may appear bleak to those hoping to sustain a career in independent documentary production, the seven panelists agreed it was easier than ever to get a film in front of attentive eyeballs. This is, however, of primary benefit to audiences — an economically and geographically wider segment of the population now has access to these films. But it can start to sound an awful lot like the smug crowing one used to hear about the democratization of the music industry. Without a viable means for artists to live off their work, the creation of art is left to the independently wealthy. I hope that as the distribution tactics discussed this afternoon continue to evolve, they create as much room for the production of work as they have for its consumption