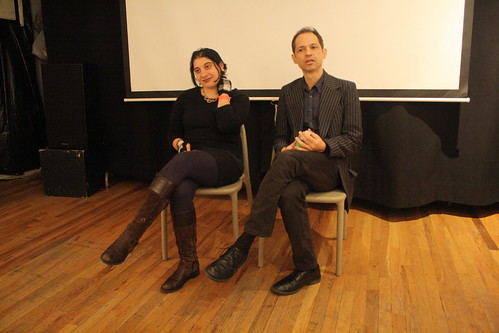 There are personal documentaries, and then there are personal documentaries. Caveh Zahedi makes the latter. In his feature-length films, which usually mingle fiction with autobiography, he has chronicled his long-term sex addiction, shown us his attempt to convince his father and teenage brother to take ecstasy with him, and cast a current crush and her father as themselves in a movie about his own clumsy attempts to win her affection. He is certainly not the first filmmaker to turn the camera on himself, but while there is an appetite for work like this, the character of Zahedi’s divulgences is unique. He admits to things that most of us would not, but it is not as though he is bearing some great darkness within him. He just seems like the kind of guy eager to open up about unflattering aspects of his personality. What he reveals is not terribly shocking, just embarrassing and a little grotesque. This is amplified by the fact that Zahedi does not seem particularly tortured or heroic about it, like Jonathan Caouette, nor is he interested in explicitly connecting his personal fixations to larger social themes, like Su Friedrich or even Ross McElwee. And while there’s an archive’s share of diary films that painstakingly catalog the minutiae of their makers’ lives, most of Zahedi’s films are medium-sized indie productions, made with other people’s money invested on the assumption that there are plenty of people out there willing to pay to see them. He has more in common a filmmaker like Woody Allen who uses a fictional persona to explore their foibles and personal fixations. But no matter how thinly-veiled, a character like Allen’s affords a distance that Zahedi’s work cannot allow. And even though we know that the Caveh Zahedi we see on screen is exaggerated, the real-life intrusions almost force us to form an opinion about Zahedi himself, and his motivations for revealing what he does.

It is worth trying to disentangle our feelings about what Zahedi might be like as, say, a dinner companion from our feelings about his films. Outside of the movies, his brand of compulsive self-exposure is not uncommon, and we have in recent years adopted all sorts of cutesy phrases, like “oversharing” and “TMI”, to describe it. It makes us wince because of the insecurity that so blatantly underpins the sharers’ weird bragginess; what do they expect other than an impressed acknowledgment of their forthrightness? Zahedi is a smart, serious guy and I would wager that he’s aware of the pitfalls here. Despite the peacocking, and its attendant approval-seeking jokeyness, he is quite earnest about his work, and its ability to be pleasurable or useful to his audience. His public self-examinations are rooted in his faith in directness, and the communicative power of cinema. If his films don’t quite work — and often they do not — it is not because they are merely vehicles for his narcissism.

Drug experiences, with hallucinogens especially, are some kind of hallmark of the personally profound, socially banal revelations found in much of Zahedi’s work. Two of the shorts Zahedi showed at Union Docs on Sunday detail his mushroom trips. In I Was Possessed by God, he takes a prodigious 5g dose, and proceeds to writhe and yell for 30 plainly-photographed minutes, raving that his voice has become an instrument of God. Zahedi does not replicate the lame filmic conventions of psychedelic drug use. He doesn’t try to take us into his head at all, although the movie’s first five minutes, in which he chokes down an entire pot of nauseous psilocybin tea, does effectively mimic the anxious moments between ingesting drugs and feeling their effect. Instead, Thomas Logoreci, who shot the thing, functions as an audience surrogate, and the experience of watching the movie is more akin to babysitting someone on drugs than taking them yourself. In other words, it is simultaneously stressful and boring.

Tripping With Caveh is a pilot of sorts for Zahedi’s aborted Purchase Fishing With John-inspired tv show. He invites musician/actor Will Oldham to Austin to spend an afternoon tripping on mushrooms, as you might have guessed . While the camera is similarly objective, this is a lot breezier than I Was Possessed by God — the giddy high of the low dose easier to enjoy than the identity-unmooring serving Zahedi took in the earlier film. The pair are fun to watch together. Zahedi is always a compelling performer, his wiry frame and anxious, roaming eyes perfectly convey the restless mixture of eager-to-please and refusal-to-compromise that seems to define his work. Oldham’s strange, tender masculinity, used to similar effect in Kelly Reichardt’s online Old Joy, makes him a perfect foil to Zahedi’s manic presence. There are a handful of great scenes here — a shirtless Oldham speeding around on a go-kart, the two of them doing a lackadaisical duet of “I Am Cinematographer” during the come down — but it is hard to shake the suspicion that Tripping With Caveh order diakofucboy is nothing more than an eccentric lark. It is entertaining in the way that most of Zahedi’s work is, and had the series continued I would have certainly watched it, but in this context, it seems rather slight.

During his masterclass with the UnionDocs collaborative, Zahedi said that he sees his primary task as the valorization of ordinary life. Film, both popular and otherwise, is so taken with the unfamiliar that it can blind us to the remarkable and precious aspects of quotidian experience. Slightness is a major liability in this endeavor, and it seems that Zahedi has not found a satisfying way to overcome it. Even more than Tripping with Caveh Order , the two animated shorts in the program — One-Minute Racist Cheap and Pills The Unmaking of I Am Sex Addict — suffer from their triviality. They are not documentaries so much as annecdotes. Of the films shown this weekend, The World is a Classroom is the only one that manages to slice off a substantial hunk of the everyday.  Zahedi began teaching at San Francisco Art Institute during the fall 2001 semester. In a kind of hyperconfessional meta move that should not have been a surprise to students familiar with his work, he had Logoreci shoot his Personal, Poetic Documentary class, which they, the students, would also be documenting for their own assignments. The first day of class, September 4th, Zahedi prefaces the semester with a spiel, probably familiar to anyone who attended a liberal arts school, about his desire to slough the authority conferred by his position, and to level the hierarchy that places student over teacher. The third class, scheduled for September 11th, is rendered in a few seconds on blank screen. When students return on the 13th, the conversation has of course moved from documentary film to the attack on the World Trade Center. In closely-framed compositions we see an array of reactions: enraged political posturing, dazed historicizing, a teary, cracked voice account of friends-of-friends killed in the attacks. In no way can 9/11 be described as “ordinary”, but these are exactly the sort of conversations people had throughout the country in the weeks and months that followed, and the scene provides the best argument available for Zahedi’s unmonumental approach. The class returns to their project the following week, and when Daniel, a student in the class, begins feuding with Zahedi about the release he has been asked to sign, another student’s comparison between their petty disagreement and Al-Qaeda’s greivances with the United States is as obvious as it is ludicrous. As Daniel becomes increasingly disruptive in class, Zahedi must assert the authority he had tried to cast off just two weeks previous.

The point is not that Zahedi was wrong. His willingness to show us his missteps permits a complex dramatization of his tentative foray into teaching. I have never seen a film that better captures the dynamics of the classroom; that describes in equal measure its transformative possibilities and the tiresome bullshit you have to deal with on the way. Zahedi’s obsessive self-portraiture does not always pay off, but when it yields something as rich and unusual as The World is a Classroom, it is easy to forget the misses.