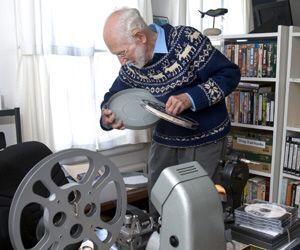 Last week brought the sad news that amateur filmmaker Robbins Barstow had died at home in Hartford. He was 91. Since the mid-1930s, Barstow had produced more than a hundred films and videos, most of them documents of quotidian family life, all marked by a peculiar narrative sensibility. In the past decade, sites like YouTube and archive.org brought large audiences to his work, and he became an avatar of the home movie preservation movement. In 2008, The Library of Congress added Disneyland Dream, his most successful work, to the National Film Registry.

Last January, http://xn--o9j0bk5t7e2a3h.net/?p=2771 Cheap Purchase UnionDocs presented four of Barstow’s films, in conjunction with the Orphan Film Symposium, long-time champions of his work: Tarzan and the Rocky Gorge (1936), Youth and the Future (1943-44), Disneyland Dream (1956), and The Making of Disneyland Dream (2009).   In preparation for the screening, critic Cullen Gallagher, who co-programmed the show with Jennifer Blaylock, conducted an interview with Barstow. As a tribute to Barstow, it is reproduced below.

Many of Barstow’s films are available on archive.org Pills Order .

Cullen Gallagher: How did you come to start making your own home movies?

Robbins Barstow: I have always loved movies. Growing up in Madison, Wisconsin, in the 1920’s, I went to see as many theater movies as my parents would let me. Douglas Fairbanks, Sr. was my childhood hero, for films like The Three Musketeers (1921) and The Black Pirate (1926). I also remember being irresistibly terrified by the dinosaurs in The Lost World (1925). When our family moved to Hartford, Connecticut, in 1930, I got a hand-cranked Kodak 16mm movie projector, and purchased 25 foot reels of short films of cartoons, comedies, and animals, which I would I charge neighborhood kids five or ten cents to watch being projected onto a sheet hung in our basement. After our next-door neighbor took 100 feet of 16mm home movies of my two younger brothers and me playing and doing stunts with our Dad in the backyard, I just knew I had to have a movie camera. The earliest films I remember making were some scenes of various family activities, beginning in 1932, when I was 12. I used a hand-held, hand-cranked Eastman Kodak 16mm camera. I became a youthful member of the Amateur Cinema League, and read a lot about making home movies, including trick shots like reverse motion and stop motion. I had a small Kodak editing and titling machine, so I could edit and title my films for home viewing.

CG: There is a wonderful whimsicality to Tarzan and the Rocky Gorge (1936), and it captures the magic of childhood imagination more than many movies I’ve seen. What was the production like, in terms of preparation and development?

RB: By the time I was sixteen, I was ready to turn my random, family filmmaking hobby into the creation of an epic teenage adventure film. In the early 1930’s, Tarzan of the Apes had become my new film hero, as embodied by the Olympic swimming champion Johnny Weissmuller. When visiting a friend of my father in the hillside woods of Granby, Connecticut, we discovered a tall, rocky gorge with a small stream and waterfall at its base, and immediately realized that this would be a perfect setting for a Tarzan movie. So I got my two, younger brothers, and three neighborhood girls, to embark on a film-making safari to the site of the gorge. We had figured out that we needed two main characters besides Tarzan to tell a rudimentary story — a hero and a villain, to whom we gave the outrageous names of Paulus Rufus Barstinio, the eminent African explorer (brother Paul), and Mahahatmi Slinkaround (brother John). Barstinio would lead a three-girl safari seeking to find Tarzan, and Slinkaround would try to stop them, to protect Tarzan from intruders. There was no script. We just made things up as we went along, utilizing the varied natural settings. We filmed the entire production, just by ourselves, in a single day on location. I directed and did most of the camera work myself, but got one of the other crew members to film the scenes that I (as Tarzan) appeared in. Everyone cooperated very well, and we all had lots of fun playing this out. We used up three or four 100-foot reels of 16mm film, but had relatively little wasted footage. After we got home, I did all the editing myself, and developed a standard narration which I would give live whenever we showed the film to family, friends, and other groups. It became increasingly popular over the years, and in 1993, nearly 60 years after its origin, I had it transferred to videotape and recorded the narration. Most of this original 1936 fanfilm was developed through on the spot instinct and inspiration.

CG: Youth and the Future (1943-44) was made with Eries Boys’ Club at the Hudson Guild Neighborhood House. What was that organization and how did you come to be involved with them?

RB: I graduated from Dartmouth College in 1941, and applied for alternative service as a conscientious objector in the military draft. I was classified, however, as 4F due to an inherited blood condition which had required the removal of my spleen in December 1936. In September 1942, I married Margaret Vanderbeek (Mount Holyoke, 42), at which time she had secured a position as girls’ group worker at the Hudson Guild Neighborhood House, in Chelsea, on New York’s West Side. Since I was exempt from the draft, the Guild also hired me to serve as boys’ group worker, and we lived in a second-floor apartment on West 28th Street. I organized the Eries Boys’ Club at the Settlement House, a group of a dozen teen-age neighborhood boys, and was responsible for supervising their after-school activities. I was also politically active, and after President Roosevelt enunciated “The Four Freedoms” as goals for the war, we discussed their meaning at a few club meetings.  Since I had a home movie camera, we thought it would be a neat group project to figure out how to dramatize “Freedom from Want” on the home front. I think it helped all of us crystalize interest and concern over how to move from the Past to the Future in this area.

CG: Disneyland Dream was added to the National Film Registry in 2008, a very high honor. What sort of life did the film have leading up to that moment?

RB: I first showed the home-edited version of Disneyland Dream to a gathering of neighborhood families and friends, projected on a sheet attached to the side of our house in Wethersfield, with my 16mm movie projector set up in our back yard, on Labor Day weekend, 1956, with me providing on-the-spot narration as the film went along. It proved to be an immediate favorite and became very popular. Over the years, I received dozens of requests to show it to community groups, PTA’s, schools, church and other social groups, extending throughout the state, as well as to relatives and at family gatherings.

Finally, in 1995, after nearly 40 years, I had the film transferred to VHS Video, for wider distribution, and I recorded the narration on tape. I was then able to have it broadcast over our local Wethersfield Public Access Community Television Channel. When I heard in the mid 2000’s, that the Library of Congress was interested in adding home movies to their collections, I sent Dr. James H. Billington, the distinguished Librarian of Congress, a copy of Disneyland Dream, along with a dozen other home movies which I had produced with our family over a period of some 70 years. In 2007, I signed an agreement donating these amateur films to the Library as “The Robbins Barstow 20th Century Family Home Movie Collection.”

I knew that in 2008 Disneyland Dream had been nominated by a friend of mine, Beth Gilligan, to be named to the National Film Registry. But the thrill of its announcement in December 2008 has been unmatched. It has been publicly shown at Home Movie Day in New Haven, at Northeast Historic Film Symposium in Bucksport, Maine, at Hartford International Film Festival, and on November 2, 2009, at Museum of Modern Art International Festival of Film Preservation.

CG: In Making “Disneyland Dream” (2009) we see some footage and photographs that weren’t included in the original film. What was the process of selection like going through your archives and backlog of material?

RB: As a life-long film hobbyist, I have a pretty good idea of what materials I have saved and stored somewhere over the years, and I actually enjoy observing my film-creating process. I’ll start out with a particular project in mind, and then as I work on it, new ideas come along, it changes, and other elements come into the picture. Sometimes new ideas come to me in the middle of the night, or when I am taking a walk. Then I search and find, and often come up with, a new angle. Putting it all together in an interesting framework is the fun of it.
CG: How do you decide on what events in your life and community to film?

RB: Impulse, instinct, availability, time, energy, request. I have a strong sense of wanting some special events to be preserved for future recollection. I want to give certain presentations an afterlife, not just have them blossom once and be gone forever.

CG: Do you finalize all the projects with editing and narration, or only select ones?

RB: I still have a couple of dozen film projects on my shelves waiting to assume priority status, with editing and narration. I’m looking ahead now to trying to switch over to digital, computer editing in future days, as long as I am able.

CG: What places have you been able to share your films over the years?

RB: My biggest reward has come just in the last couple of years, through being able to share 16 of my amateur home movie productions with anyone on the entire planet who has access to the Internet! This was absolutely inconceivable when I first started making films. All anyone has to do now is go to the archive.org web site and search for “Barstow Travel Adventure.” I’ve gotten scores of letters from total strangers around the world thanking me for sharing these. For me this is truly a “reward greater than gold.”  (As of January 20, 2010, Disneyland Dream is reported to have been downloaded 61,612 times, and Tarzan and the Rocky Gorge 147,564 times.)

CG: What changes have you seen in the home movie/amateur filmmaking community?

RB: The biggest change has been in increased awareness through the promotion of the annual Home Movie Day (www.homemovieday.com) by the Center for Home Movies (www.centerforhomemovies.org).

CG: What do you see as the cultural value of sharing home movies?

RB: Home movies provide insights into other people’s lives. Moving images go beyond still photographs. They provide active “slices of life,” which bring back recollections for elders and revelations for youngsters. They also provide an incomparable legacy. The author of Zenzele — A Letter for My Daughter (1996), J. Nozipo Maraire, has said: “Each of our lives is a story. What we leave behind, in words and pictures, is our telling of that story. These images are the very manifestations of our immortality.”

2 thoughts on “A Conversation With Robbins Barstow”