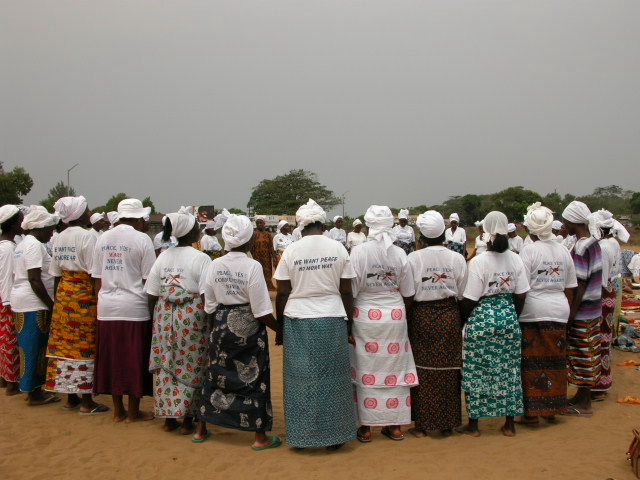 I am in no position to evaluate the political efficacy of Pray the Devil Back to Hell Order , but I think that is the criterion by which a documentary such as this lives or dies. Gini Reticker’s movie portrays the efforts of a group of Christian and Muslim women who joined to end the civil war in Liberia, and cease the attendant anarchy that allowed Kalashnikov-wielding child soldiers representing both dictator Charles Taylor and Liberians United For Reconciliation and Democracy, the rebel group that demanded his ouster, to make life unlivable for anyone they perceived to oppose them. Despite constant threat of rape and murder, these women made themselves instrumental in removing Taylor and bringing peace to their country. This is quite obviously an incredible story, but it seems to me its force is tempered here by the banality of its telling. Reticker never swerves from the well-trodden path of the issue-oriented, activist documentary, giving her audience exactly what they expect. In lieu of interrogating or challenging her viewers, she stakes her project’s worth entirely on its social impact.

Whenever I see a film like Pray the Devil Back to Hell Cheap , I am reminded of this passage from Jill Godmilow’s 1999 essay “What’s Wrong With the Liberal Documentary” :

“I’ve been thinking for a long time that what is commonly understood as the progressive or liberal documentary is an inadequate form — a relatively useless cultural product, especially for political change… Its basic strategy is description and it makes its argument by organizing visual evidence, expressive local testimony and sometimes expert technical testimony into a satisfying emotional form…For the most part, documentaries address and entertain educated middle and upper-middle class audiences — audiences of persons who come to the documentary cinema to learn about the world and, perhaps, to get fired up about something. It ends up confirming and making comfortable the class status of that middle class audience, by providing an opportunity for compassion, for up-lift, for hope, and finally, for self-satisfaction — and perhaps complacency. There is nothing to learn about ourselves and our activities here. There is everything to learn about the other. We and they are not linked other than by feelings, like caring, concern, sometimes outrage. But the connections or links are momentary. We leave the theater filled up with our best feelings about ourselves, and the next day go about the same business as the day before, in the same way. This produces not useful knowledge, but desire — for a better, fairer world — but not the self-knowledge to begin to change anything.”

I don’t share Godmilow’s pessimism about the value of desire or feelings like concern and caring, but I think that she does capture something deeply unsatisfying about this mode of documentary; nothing is ever really at stake for the filmmakers or the audience (or at least the kinds of audiences I tend to see movies with). It’s not a question of motives — making a documentary is exhausting and difficult, and basically impossible without a genuine dedication to one’s subject. But good intentions are not enough. Tasteful reportage of apparent injustice leaves no room for the viewer to feel anything other than admiration for that injustice’s victims, and for themselves for having paid this token respect. It’s rare to learn anything from these movies that could not have been gleaned from a synopsis. There is none of the dramatic push-pull that subverts expectations and allows for the transformative potential we expect from art. And that’s the basic tension here: between those who want documentary to function as art and those who want it to function as journalism. Partisans of this genre will say that liberal documentaries give voice to people unrepresented elsewhere. They are not wrong, and this is a noble goal. But more often than not, these movies do not travel outside the closed circuit of festivals and arthouses . And in the context of so many other somber accounts of tragedy, each individual story is subsumed under a kind of general assertion of the world’s misery and unfairness. Moreover, I’m not sure that a feature film is a particularly good form for conveying information. Both text and radio allow for a greater nuance in detail and analysis, and television reaches an exponentially larger audience much quicker. There is then a queasy relationship between form and content, an overconfidence in the power of the material that tempts directors to slack on the work involved in making it meaningful to their viewers. Throughout Pray the Devil Back to Hell, I wondered why its creators chose to tell this story on film. Is there any reason other than the fact that they happen to be filmmakers?

Even on the terms of the liberal documentary, Pray the Devil Back to Hell Pills is never really successful. The footage from Liberia is mostly archival only ever serves an illustrative function. We never really stay with any the scenes long enough to experience their potential impact, and the TV-style quick cutting somehow mutes and renders familiar images of children with big guns terrorizing whole villages. Blake Leyh’s bass-heavy, dramatic score dampens our involvement with what we see by its unnecessary emotional over-direction. It never seems that we are being shown anything. The entire story is told in interviews and titles, and this absence is never made resonant, it just kind of hangs there, hoping to go unnoticed. Only when the interview subjects are on camera, does Pray the Devil Back to Hell justify itself as a visual experience. Leymeh Gbowee and Asatu Bah Kenneth, in particular, are fascinating to watch. Their expressiveness and wit makes me wish that Reticker had limited herself to interviews. Each time she cuts away from their faces to news footage, she takes us from the supple special access to the real granted by documentary to the leaden insistence of actuality we know from reality tv. Her movie is not really dull, but it is never urgent — the events depicted are always elsewhere, we are never made to feel their weight. Apart from these interviews, we aren’t even allowed the kind of emotional investment that Godmilow derides. The irony here is that, with their sit-ins and sex strikes, the Liberian women on screen forced peace by making their demands an inescapable obstacle in the everyday lives of their adversaries. There is a stark contrast between their tactics and Reticker’s, who is content to meekly present the facts and step aside.

One has to tread very carefully with this line of criticism to avoid lapsing into a facile, useless cynicism. It’s not that I don’t want these movies to be made. It’s better that this story is available imperfectly than not at all. It is just frustrating to see real, unimaginable heroism rendered as dull cliché in a worn-out newsmedia register. By refusing to acknowledge the world into which she has released her film, Reticker does a disservice to the one she documents. Asking this of Pray the Devil Back to Hell is not to prioritize aesthetics over politics: it’s not that every film needs to be challenging or beautiful, but that our facility with these tactics leaves them insufficient to actually communicate the extraordinary nature of this tale. But I am a middle-class American man who sees a lot of movies and has never known the kind of suffering Pray the Devil Back to Hell describes. My objections here are meaningless if the film comforts or galvanizes those in situations similar to that of these women, or somehow contributes to lasting stability in Liberia. For a variety of reasons, I have trouble believing that this will happen, but I sincerely hope that I am wrong. Order Cheap online

3 thoughts on “An Inadequate Form”