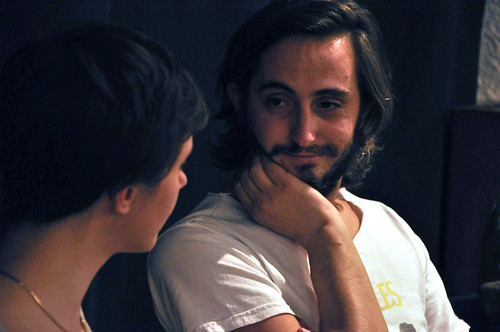 Alban Muja is an artist from Kosovo who is currently doing a residency at UnionDocs through C.E.C. ArtsLink. On November 7th, he screened a short program of videos and films about the nature of names and the uses to which they are put. Spanning the past six years, from Muja’s college graduation to his emergence in the international art world, the four works here trace the early development of an exciting new voice.

While Muja’s background is in painting and drawing, he has garnered the most attention for his videos. His first, Free Your Mind (2004), opened the UnionDocs program. It consists of one static frame, shot from a low-angle with a consumer DV camera, in which Muja (then a recent art school graduate) attempts to purge himself of influence by reciting the names of artists, locally or internationally famous, as they come to him. Later efforts Palestina (2005) and Cheap Tibet (2009) are both short interviews with Kosovar Albanians named for countries also engaged in struggles for sovereignty.

Muja produced the first two videos while Kosovo was still under UN administration, and the third in the year following its declaration of independence. Underlying all three is an investigation of Kosovo’s recent history, and an attempt to discover the character of the newly independent nation. But Muja abjures big statements. These three works are modest and narrowly defined vignettes. Their concern with Kosovo at-large is never explicit, but it is not exactly oblique. All three of them map the flow of international news into Kosovo. The country’s plight is evident in the very nature of Palestina and Tibet Pills online Pills , and Muja is happy to leave it at that, steering both interviewees toward the particulars of their christening. In Free Your Mind, Muja mingles canonical figures with Southeastern European favorites and Kosovar contemporaries. And Muja’s cultural position is evident from his performance, as unfamiliar names roll gracefully off his tongue while he discovers novel pronunciations for those he knows only from text. In each, there is a kind of two-way refraction that illuminates something of contemporary Kosovo through the questions of nomenclature, and vice-versa. online

But the three videos are just sketches–statements of purpose that resist the slightest formal or structural organization. Their implications are enticing, but the videos, though neither unpleasant or boring, fail to deliver on the promise of the ideas. They share the unfinished, partial quality that mars so many videos produced for the gallery setting, but Blue Wall Red Door (2009), the 33-minute film that closed the program, suggests that Muja has his sights set higher. Co-Directed with Yll Çitaku, the documentary directly addresses Kosovo of today. Or yesterday, really, since one of the film’s lessons is that Kosovo is changing too rapidly for a report like this to stay relevant for very long.

When Muja and Çitaku say their film examines how residents of Pristina orient themselves in the city, they are not venturing idly into urbanist theory, but referring to an urgent practical problem. In Kosovo, national leadership has changed hands so many times in the past few decades that street names have been altered or re-named at a pace that renders them functionally useless. In Pristina, the capital, a major artery is called Lenin Street one day and Bill Clinton Boulevard the next. In lieu of a standardized system of roadway nomenclature or addressing, Prishtinalis rely on a loosely agreed-upon set of landmarks to direct one another: large or unusual buildings, natural features like rivers or hills, and other places seemingly chosen at random, like the red door of the film’s title (which, of course, is no longer even red).

That’s not such a problem if you’re just directing a friend to your house, but for public servants, cab drivers, and visitors, it is nightmarish. Alternating between point-of-view shots and sequences in which Muja plays a gregarious man-on-the-street interviewer, the co-directors lead us through the problem at each municipal level, bringing us on cab rides, tagging along with mail carriers and fire fighters, and stopping passersby to ask for directions. Their methodical approach to the street name problem gives us a panorama of life in Kosovo, introducing us to citizens across a range of classes and lifestyles.The evolving street names are symbols of Kosovo’s recent history, and the spaces they are supposed to denote provide a physical record of it.

Blue Wall Red Door‘s tone is surprisingly lighthearted and fun, but this is not tragedy played as farce, or a jeering condemnation of developing world bureaucracy. Almost everyone who appears on camera is good humored and eager to participate. They explain their problems getting around the city with a sense of irony untainted by bitterness. The film instead looks to Kosovo’s future with an almost giddy hope that does not obscure the real difficulties that face the nation.

Here, Muja not only ventures deeper into Kosovo, but into issues of nomenclature as well. Unless you live in a city like Pristina, it is easy to take basic administrative functions like street-naming for granted. By documenting Pristina’s navigational difficulties, Muja and Çitaku make evident the political nature of nomenclature. They also illustrate the most the most basic purposes served by naming, and show us what happens in its absence. But this is no  meditation; everything happens very quickly. Blue Wall Red Door Order is one of those delightful narratives, like a Donald Barthleme story, that manages to propel you forward without ever letting you fully grasp your bearings. It keeps your brain one step behind the action, but no further, interpretation nipping at the heels of comprehension. This is precisely the sort of dynamic Muja’s videos fail to produce. The three of them clearly announce their themes at the outset, but bring us no closer to them as they unfold. Blue Wall Red Door launches in medias res and never stops barrelling forward, accumulating new meanings, and altering our sense of what we are watching at every turn. It is a thrilling and intellectually rewarding experience. If this is the progress Muja has made as a filmmaker in the past five years, I cannot wait to see what’s next.